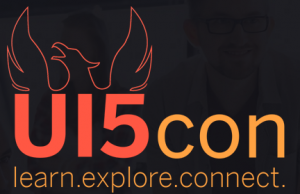 The 4th UI5con was organised mostly by the UI5 developer themselves and was to say it shortly: not only the biggest, but the best UI5con ever, ever!!

The event took place 30th June 2017 in St. Leon-Rot at SAP itself (UI5con@SAP) and this time it felt like a real big conference (with more than 50 sessions and 400 participants), reflecting the importance and also maturity of the UI5 topic itself. Location at SAP and running the event on a working day allows the presence of all of the core UI5 people. Which was a great opportunity for everybody to meet personally with the people, you mainly know only from GitHub commits. Fantastic! It makes a big difference to meet in real life and face to face. The majority of the presentation was also held by SAP UI5 team, which did open up many insides, what we can expect in the bright SAPUI5/OpenUI5 future. But still there was plenty of space for sessions from non-SAP community members.

Right in the OPENING session we were presented with the new OpenUI5 Logo, a modernised Phoenix, which made me, proudly dressed with the „old“ Phoenix t-shirt, instantly looking outdated as almost all the SAP UI5 folks did run around with the new shirts and new logo. Btw a updated ui5 shirt would have been also a perfect speaker gift. 🙂

After the OPENING and traditional „NEWS AROUND UI5 THAT YOU ABSOLUTELY HAVE TO KNOW“ (Recording) sessions, the most important session „UI5 EVOLUTION“ (Recording) from UI5 Lead Architect Peter Müssig, took place.

Evolution instead of Revolution, the right way? 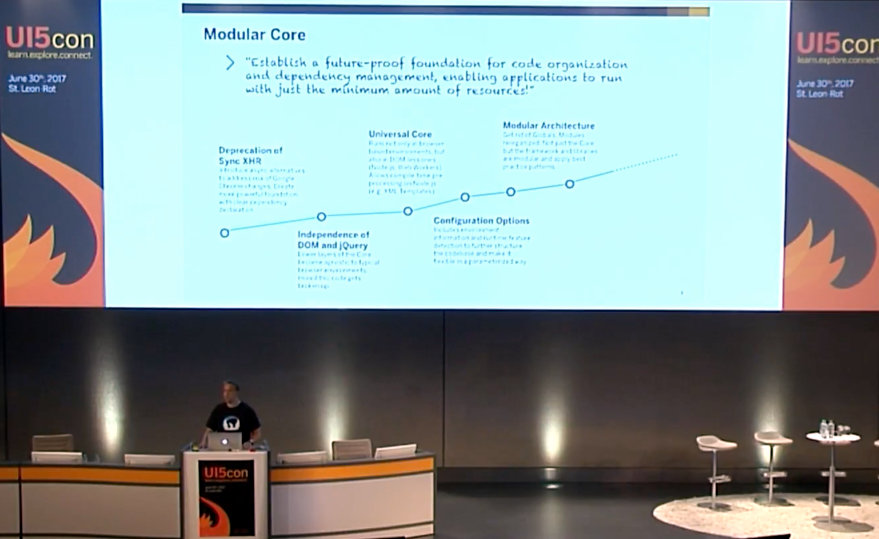 Peter Müssig (despite his colleges also dressed in an outdated UI5 shirt!) did explain, how decision-based on an internal innovation project named „Cheetah“ (happened Q3/2016) and to which extend UI5 will be going to a next state of development. One buzzword was „modularize“.

The size of UI5 is one mayor issue, perhaps the ultimate issue at all for UI5. This point seems so obvious if you watch Chrome dev tools or simply start to explore the current version 1.48.5 of the OpenUI5 runtime with a size of 191 MB (yes, it is Megabytes) and more than 11.000 files (ok, half of them are debug files). Normal caching mechanisms of the web are not enough for UI5, it has it’s own AppCacheBuster in the core, another evident that UI5 is somehow „handicapped“. On the other hand, it is not only „hot air“ which makes up the size of UI5, it is a brillant set of hundreds of great ui controls and a core library, which has all and more within to build enterprise grade applications. But the UI5 core, which is mandatory for each application, is grown too big, which results especially on mobile devices to bad performance as all the code is loaded and interpreted needed or not! Splitting the core up in modular parts and combining it with a new build process generating tailer-made UI5 runtime (self-contained applications) for each application should bring ease. This process reminds me heavily of the jQuery Download Builder. I completely agree with this approach.

Peter Müssig already showed first code snippets (in VS Code 🙂  ) and a demo in which the loaded code was reduced by more than 60 percent. Very promising: 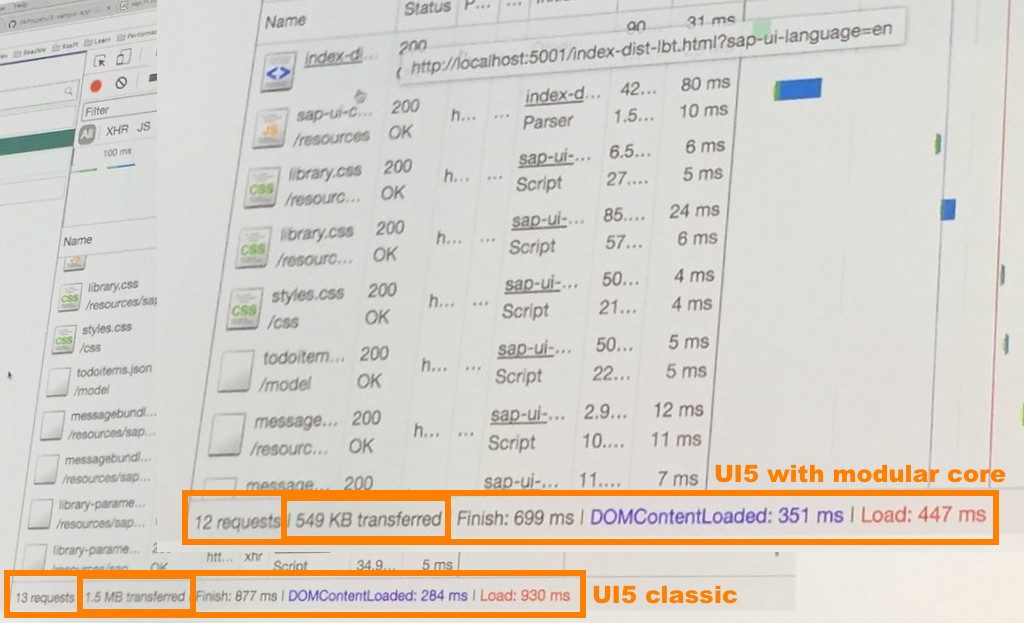 But, but …….. another main requirement of UI5 Evolution was compatibility. I understand this requirement from a medium-term SAP point of view. I guess this prevents the overdue and so necessary UI5 Revolution. After almost 9 years, almost 25 stable minor release and hundreds of patch releases, we need now a condign successor version of SAPUI5/OpenUI5, which is a real V2 and not a v1.80.15! A version which fully can leverage current trends (Typescript, ES6,…) and is freed from burden of the past. The UI5 team has the potential, the people and spirit to do something great again. If they only allowed to! Cut of old tails! Free UI5 from Fiori Launchpad slavery, where all of the thousands of UI5 apps need to run with the same UI5 version, preventing real quantum jump at least for single progressive apps. Perhaps we need both: UI5 Evolution for the old soup but also UI5 Revolution for the future. Otherwise „lost“ ground (iOS, Android) will never be conquered. 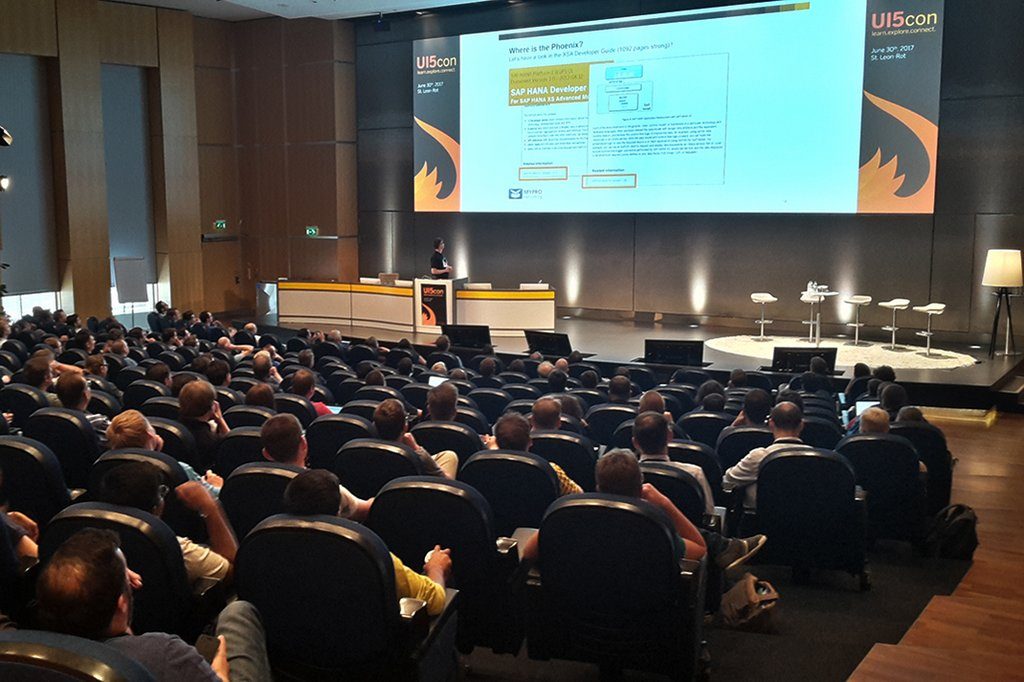 I had the honour to speak directly after Peter Müssig about „UI5 on SAP HANA XSA – SAP Full-stack JavaScript Development“ also in the huge audimax (Room A). This session is not so important for UI5 itself, but perhaps will influence the future of some UI5 developers.

My session introduced the new Runtime- and Development-Platform „SAP HANA XSA“, which allows JavaScript Development both for frontend and backend. In my opinion HANA XSA provides a great new opportunity for us UI5 developer to extend our JavaScript knowledge also to backend development. XSA („The Beast“) is founded by SAP on proven, outside SAP widely used components/concepts like: Git, npm, node.js. SAP provides his functionality also as npm packages, currently not via the public npm registry. This finally bundled with the in-memory database HANA and all his opportunities. All in all a great couple with a great future.

Slides of this session can be found on Slideshare:

Many Topics, many Sessions

Besides these sessions there was much more valuable to see and to explore. Slides, Recording and Links are available on the OpenUI5 website. Enough stuff for the next months.

Many thanks to all the participants for this perfect UI5con. Keep going!